We’re always up for travel and love to check out new places, but it can be hard to pick a location when you know the weather could very well be miserable. A little of internet research kept pointing out that Budapest was a great city to see any time of year and all those blogs and trip advisor reviews weren’t wrong! We got back Monday night from a wonderful, long weekend in beautiful Budapest.

We started off our mini break the right way Thursday night by meeting our friend Saskia at MarktHalle in Moabit for dinner and then drinks. It was such a cool venue and to top everything off at the brewery located on site they offer their very own Berlin brewed IPA! As much as I love German beer there’s nothing like my favorite hop-filled IPA and now I know where to find one in this wonderful city!

We woke up late the next morning, packed up and headed to the airport for our flight to Budapest.  We were immediately struck by the amazing architecture, the easy to navigate public transportation system and the fact that almost everything is posted in both Hungarian and English. We learned one word before visiting- köszönöm (thank you) and while we tried to throw it in once in a while everyone we met spoke some English. It was dark by the time we got to our apartment, but the city is almost as gorgeous at night as it is by day. We had picked out a restaurant ahead of time in an effort to avoid our most common travel related argument- where to eat. It worked out perfectly- no fighting over cuisine and the food was delicious! I ordered wild boar goulasch with gnocchi and Dave opted for beef cheek with sheep’s cheese potatoes. Dinner was a long affair- more than two and half hours, but we were in the mood to just chill, chat and soak in some local Hungarian culture- so it was perfect. After dinner we took a short walk through our neighborhood before turning in for the night. 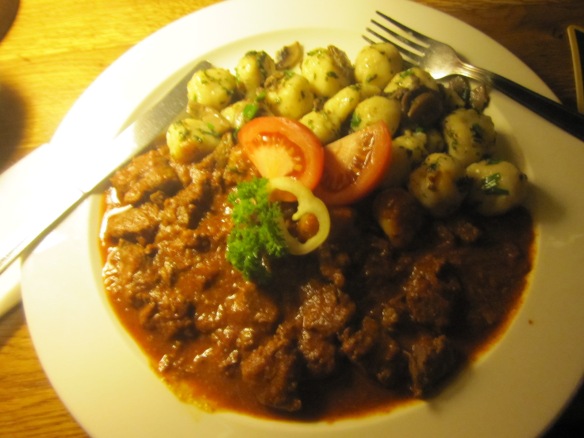 The next day we got an early start on our touristing by heading straight to the Market Hall (Nagy Vasarcsarnok). The first level of the market consists of food booths, the lower level- fish and pickled goods and the upper level souvenirs, textiles and a few little restaurants. We had fun checking everything out and I found my Christmas ornament (I collect Christmas ornaments from all the cities we travel to). My ornament is the holy family in a nutshell…literally! I made about a 100 dorky puns over the course of the weekend. We also shared a Lángos for breakfast- basically fried dough with sweet or savory toppings. Ours had cinnamon, sugar, honey and jam- so of course it was amazing. 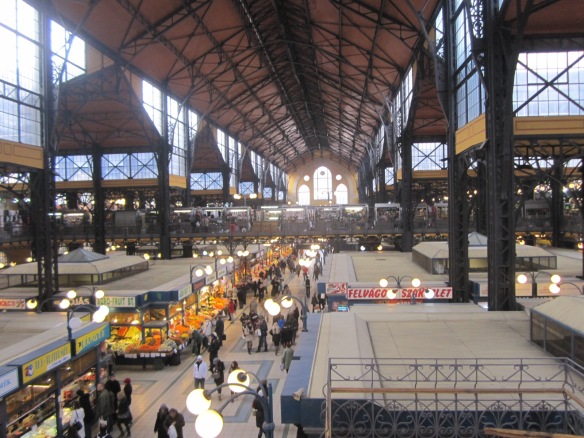 After the market we worked off our Lángos by crossing the Danube, moving from Pest over to Buda and then trekking up Castle Hill. We spent a few hours walking around the castle, checking out the fisherman’s bastion and learning a little bit about Hungarian history (something we’re both very poorly versed in). 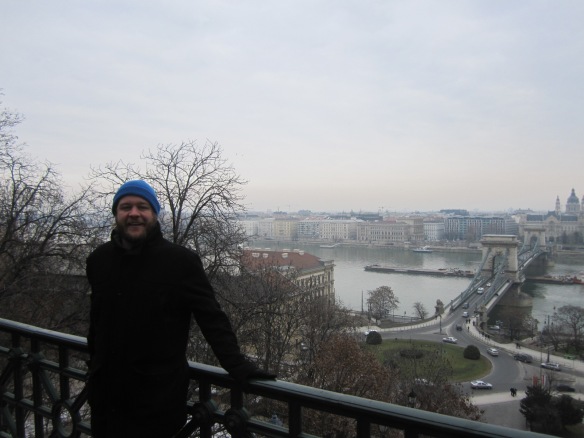 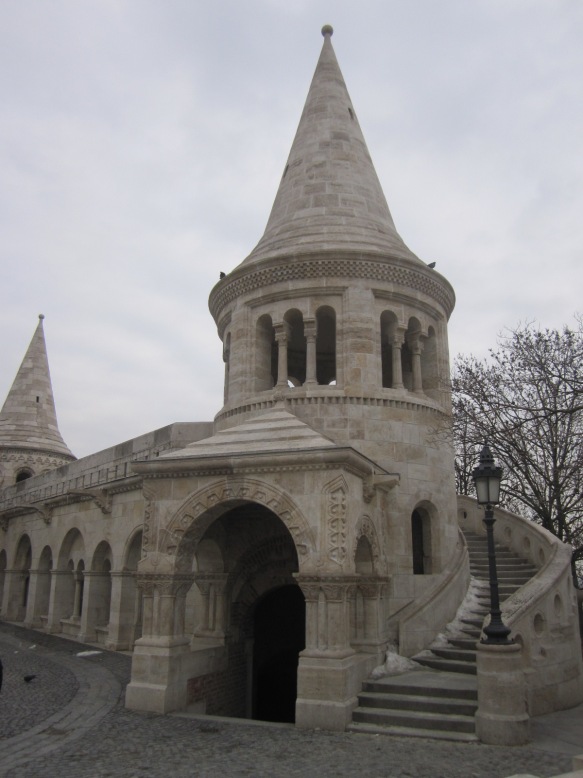 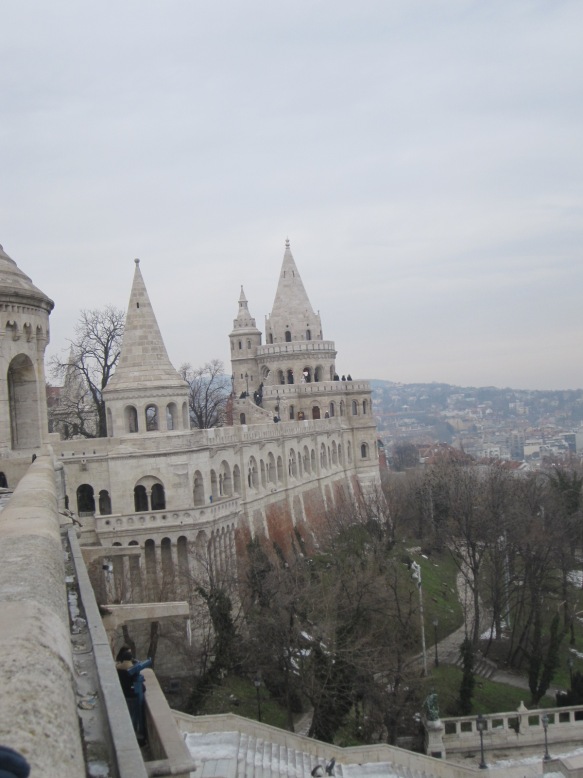 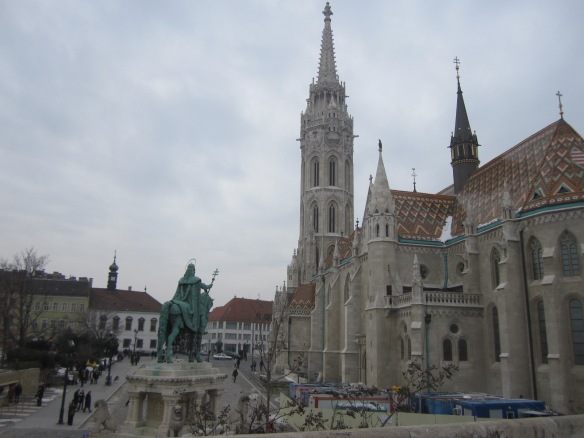 From Castle Hill we headed back into the city and up the trendy Andrássy Avenue. There we stopped at the Book Cafe. Located on the top floor of a book store it’s an impressive cafe. We lucked out with some of the “comfy” chairs and warmed up with espressos, a slice of cake and a glass of wine. 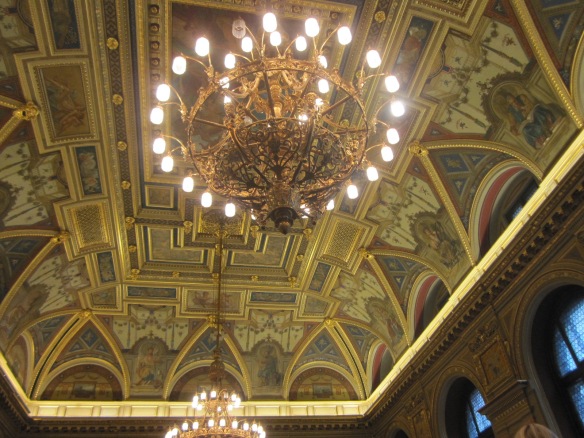 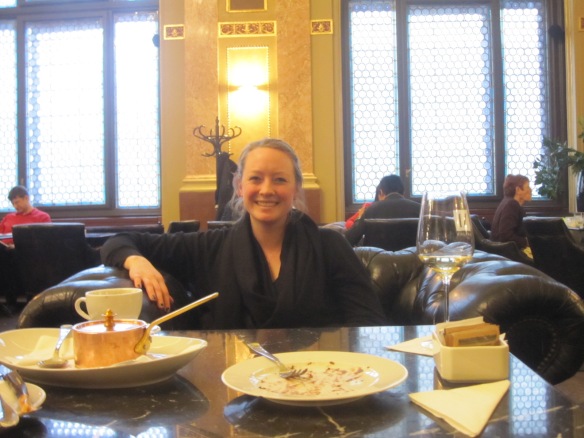 From the Book Cafe we headed further east on the M1 (the world’s second oldest subway after London) to take in Heroes Square and the City Park before darkness fell. When we got up near Heroes Square there were a couple hundred people waiting in front of a building. We were curious about what was going on and upon walking closer discovered that behind the building was a huge outdoor skating area with stadium style lights and everyone was waiting to get on the ice. It was awesome to watch the empty ice fill quickly with hundreds of people excited to get in some outdoor skating. After watching a bit of skating we explored the city park and found another gorgeous castle- the city is just packed with the most beautiful buildings! 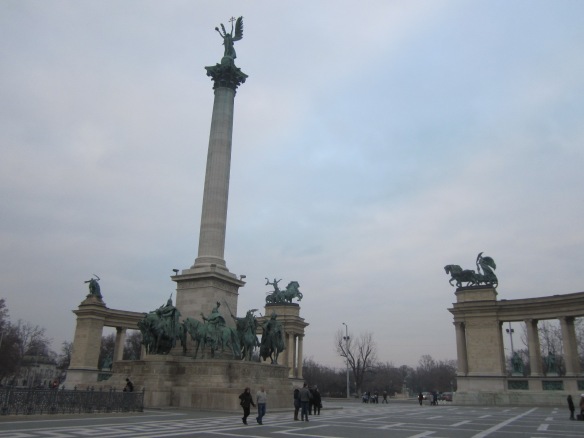 We made our way home for a snack and a rest before heading out for some drinks and and dinner. We thought about trying to go out to a club or another bar, but it turned out that we were absolutely exhausted from our long (COLD!) day of touristing and decided to head home where we fell asleep as soon as we got back to the apartment.

When we woke up Sunday morning we packed up our bathing suits and headed to a much looked forward to Budapest activity- a trip to one of the city’s famous baths. We opted to visit the Turkish Bath, Rudas, which is only co-ed on weekends. Rudas has been operating since the 16th century and the spas definitely have an old world feeling. They are dark and the main bath is located directly under a dome letting in small bits of natural light. We bought the combination ticket and enjoyed moving back and forth between the pool and the bath area- with 5 baths ranging from 28-42°, saunas and steam-rooms  a plunge pool and more. We spent a relaxing morning enjoying our first experience with the “turkish baths” and were so glad we decided to visit. 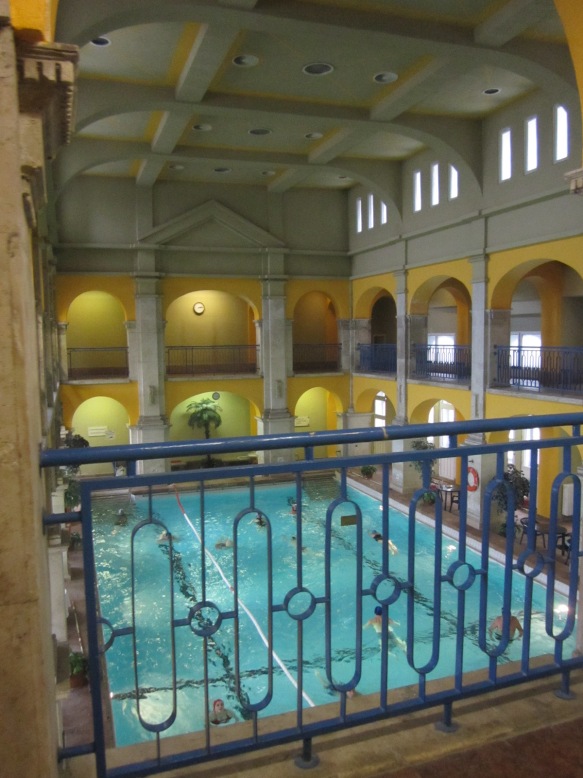 After lunch we wanted to get in some additional touristing as it was already our last full day in the city. We walked over to St. Stephen’s Basilica (you can’t visit a European city without at least checking out one church!). This one was beautiful and held the added excitement of being the home of a holy relic- St. Stephen’s right hand. That’s right you can view St. Stephen’s mummified right hand for just 200 forints (about 1 US dollar)! It was actually pretty cool and Dave claims it was the highlight of his trip. 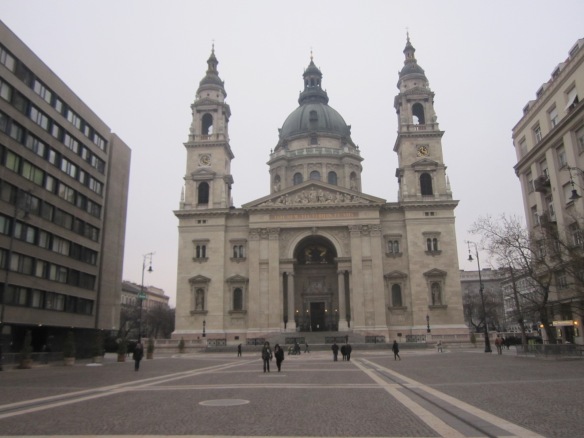 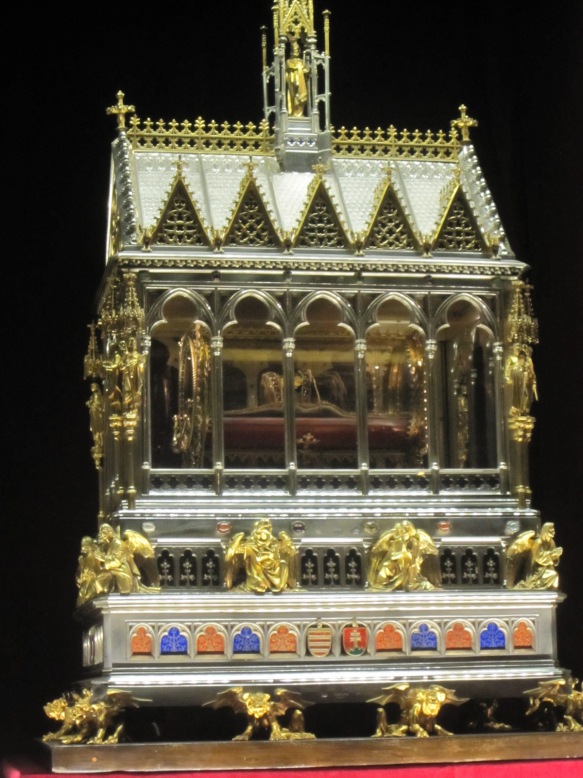 After the hand we made our way into the Buda side of the city and started a steep hike up Gellért Hill to the Liberty Statue. The sun had already set and the path was slippery from snow (which started falling again on our way up), but the view from the top was unbeatable. Since we got such a late start up the hill we were also able to enjoy it with a relatively small crowd. 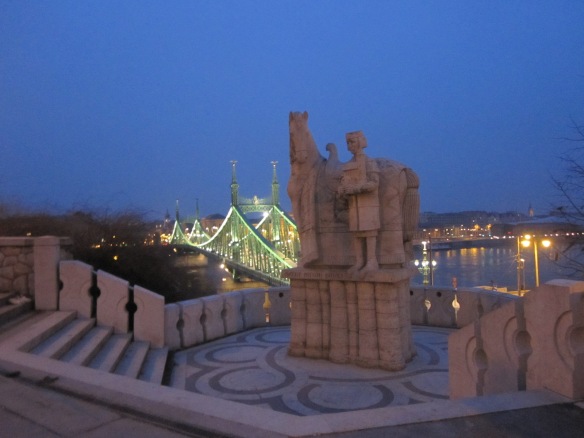 Post hike we headed home for dinner before braving the snow to visit a little wine bar with free live music every night at 9:00 pm. We ended up being the first patrons to show up, but we settled in and ordered two delicious red wines. Even though we’ve been in Europe for almost a year and a half now we still are getting use to being the idea of being fashionable late. The musicians (a cute old man in slacks, a button-up and running shoes and his wife- both probably in their late 60’s/early 70s) showed up around 9:20. We didn’t harbor any ill feelings towards the late musicians, but were eager for the music to start- and when it did we forgave any lateness. The man was so energetic and an absolutely amazing piano player. A few songs in his wife joined him in singing. He had the most eclectic taste- playing everything from Bach classics, to Louis Armstrong, musical favorites and an especially awesome version of Chattanooga Choo Choo– sung in Hungarian of course! We ended up staying for more than two hours and it was definitely the highlight of the trip for me. The last song we heard was a breathtaking version of a Bach piano sonata that was strangely both calming and exhilarating.

Monday we woke up extra early to fit in a few last things before heading to the airport for our 4:30pm flight. We decided the best way to spend our last morning was by taking advantage of another bath. We jumped on the train and headed out to the Szechenyi Baths. The main draw of this bath are the three large outdoor pools. They have a variety of indoor pools, saunas and steam rooms as well, but the outdoor pools were by far the highlight of this location. It was an especially romantic day to enjoy them as snow littered the ground and was continuing to fall during our visit. 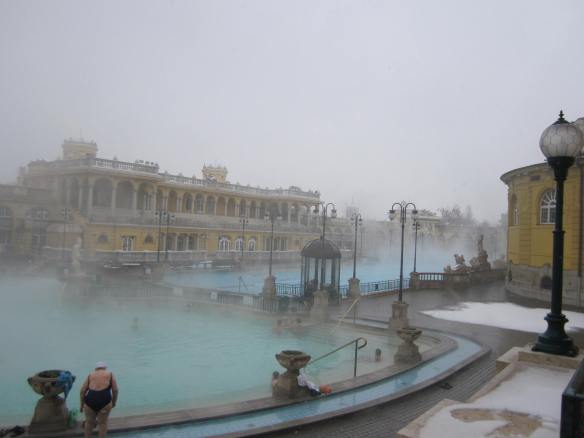 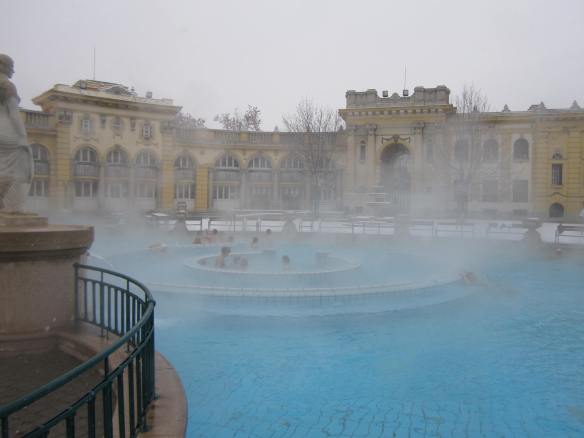 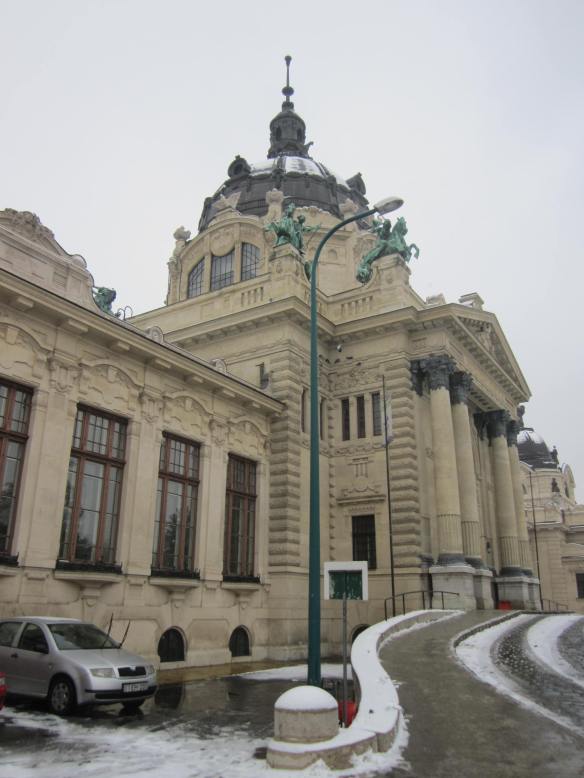 After spending all morning at Szechenyi we headed back to the apartment to pick up our things, make one last stop to see the Parliament Building up close and grab some lunch before heading to the airport. We had a fantastic weekend exploring Budapest and our already itching to plan our next trip. Luckily we have a lot to look forward to this next month with my friend Jessie coming to visit for the first week of February, Valentines Day, an Eisbären game and Dave’s ski trip to Austria! Thus far 2013 is off to an amazing start! 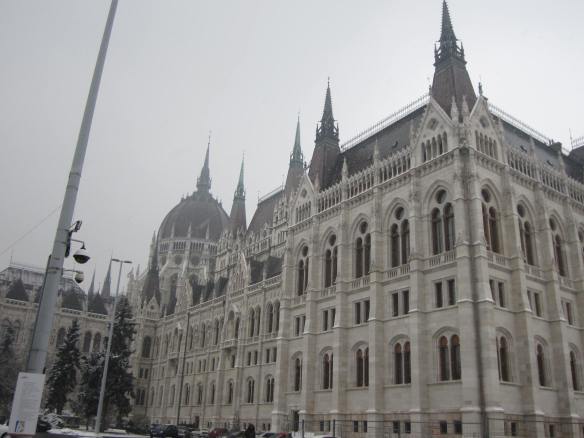 2013 is officially underway in what promises to be an exciting year for us! Adrian is staying busy with work and Dave is working hard on school trying to get his Master’s Thesis ready.  We are excited about everything that is coming up for us and we have so much to look forward to!

First up is our trip to Budapest, Hungary next weekend. For a Christmas gift, Adrian planned a surprise date for every month of the year and the first one is coming up at the end of January: a three night stay in Budapest- giving us a chance to see the city and to get out of Germany for a break. We’ll definitely be writing a blog post about that so look forward to it.

Once we get back, Adrian’s old friend Jess is visiting all the way from California after spending January in Ghana. Then at the end of February, Dave is heading on a ski trip to Austria with some friends from school. Next up it’s Dave’s birthday and the one year anniversary of when we got engaged! After that we have our trip to the Greek islands, which will be a great to welcome back the warmer weather.

We’ve also been taking advantage of winter in Berlin and trying to get out and be as active as possible despite the freezing temperatures! And of course throughout all these adventures we’ll both be working hard and planning for our wedding in October of this year, which will definitely be the highlight of 2013! We are trying to get everything sorted out from over here in Berlin and have made a ton of progress on what hopefully will be a fun time. We can’t wait to see everyone! 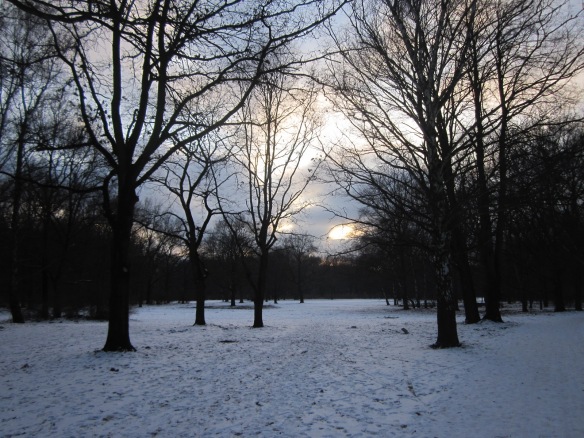 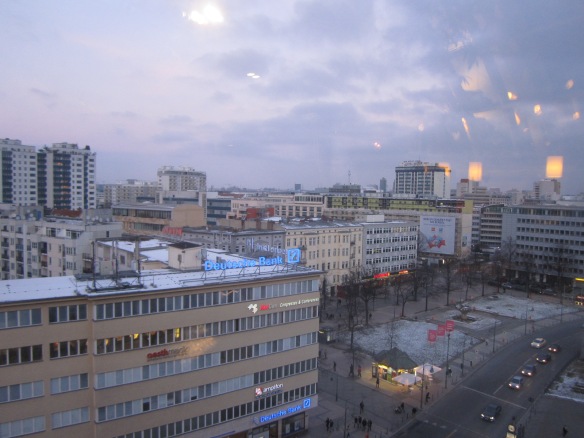