We had been a couple for a full five years before we finally decided to get married in March 2012 when Dave popped the question in Berlin’s famous Tiergarten Park. We first met when we were both students at the University of Puget Sound (Go Loggers!) taking the same class, Professor David Balaam’s International Organizations. Our first official ‘date’ was to see Built to Spill in Seattle, Washington where we discovered a mutual love for drinking beer, going out with friends and loving life!

After we graduated, we headed back East to live for a summer on Martha’s Vineyard. Adrian was busy working hard at the Harborview Hotel while Dave was busy working on his tan at the beach. From there we moved to Washington, DC for two years where we watched Barack Obama’s inauguration, drank countless pints of Yeungling at the Cleveland Park Bar and Grill and developed a lifelong love affair with our nation’s capital.

Next we headed north to Boston (much to the confusion of DC’ers who can’t understand why anyone would live in New England) where we lived for two and half years; frequenting Fenway Park, the beaches on the North Shore and apartments of friends all over the Greater Boston area. Dave worked for two years for Boston Financial while Adrian worked as an Admissions Counselor for Northeastern University where she gave regular talks to hundreds of would be huskies on how great it is to live in Boston.

Finally, we made it to Berlin where we are now… Adrian chases kindergartners around all day while Dave stares at Excel spreadsheets all day and occasionally takes classes for his Master’s in Finance. We spend our free time traveling, hanging out with friends and enjoying each other’s company.

We are excited to get married and are looking forward to having all of our friends and family in Southern California for the big day. In addition to being a couple, we are also best friends and while we want our wedding to be a celebration of our relationship, we also want it to be an awesome party! 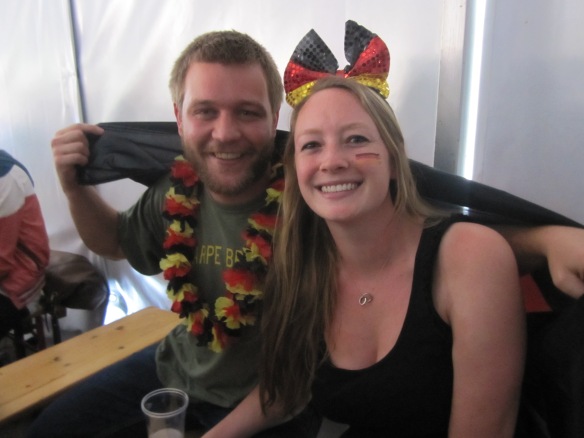