Writing that felt a little like saying “I make fire”.  Yes, I have started intensive German classes (we meet Monday-Friday from 9:30-1:00), but I’m pretty sure my German communication skills still resemble those of a caveman…me want schnitzel?

I kid.  Even after just three weeks in the course I believe my language skills have improved a lot. Though I took German for a year at UPS that was over 8 years ago now.  Coming to Berlin I was a little disappointed that my old German skills didn’t come rushing back, though I must admit that I didn’t put forth the greatest effort.  There’s also the additional problem with the fact that most restaurant and retail staff in Berlin speak enough English that as soon as they detect that you aren’t a native German speaker they switch to English. So even if I’d been up to the challenge it would have proven difficult to practice the little German I knew on those I was interacting with.  Luckily I am now getting the opportunity to listen to and speak German for a good 3 hours each weekday.  Though most of what we’ve covered has been review my vocabulary has increased tenfold and we’re starting to venture into new territory.

My school is called Sprachenateiler Berlin and I’ve really liked it thus far. My class is small- there are only 6 of us and we come from everywhere…literally!  Not one of us is from the same country.  We come from Spain, Cuba, Brazil, the UK, Australia and the U.S.A.  The school has such a diverse mix of people- something I really like.

Every Wednesday the school hosts “Cultural Wednesday” events.  These are free or very cheap opportunities for students to see a bit more of Berlin and practice a bit of German.  I’ve attended two so far- the first was a walking tour of the Kreuzberg area and the second a guided tour of the Computerspielemuseum.  I wasn’t really sure what to expect on that last one, but it turned out being a really cool place.  Our guide spoke to us first in German and then in English- so I could catch most of what he was saying!  The museum houses a wide variety of original computer and game systems from the 70’s and 80’s.  It also details the rise in popularity of computer/video games and the different platforms invented to host them. There was some really interesting stories about some of the games.

My favorite story was about how Mario got his look.  Today video game characters closely resemble actual people and the video game industry has enough money to create top of the line graphics. Apparently back when Mario was invented computers weren’t sophisticated enough to create realistic human figures that could also move, jump etc… Additionally, the spectrum of colors available for graphics were extremely limited.  Only six colors were employed for the creation of the original Mario.  He wears overalls because if his sleeves were the same color as his torso you wouldn’t have been able to see his movements in a profile view.  He has a mustache for facial definition and a hat due to the fact that hair cuts were essentially impossible to create via a computer. Since the introduction of Mario and his gang in the original Donkey Kong (whose name apparently came about due to a translation problem the Japanese encountered…Donkey Kong was suppose to translate to King of the Monkeys) his popularity has increased dramatically as has the progress of modern technology.  Today Mario looks just a bit different than he did back in the early 80s… 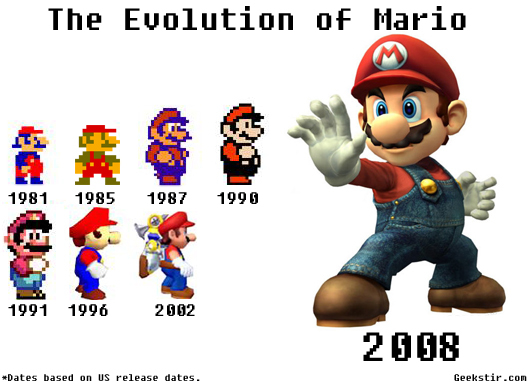 There were tons of other interesting antidotes, but the best part of the trip came at the end.  The museum houses a large collection of video and computer games that all guests can play for free.  As soon as the guided tour concluded our group spread out and took over!  I spent some time playing the old video arcade games- Frogger, Space Invaders and Centipede before trying out an ultra-new racing game on a 3D flat-screen.  They has a video game room complete with 4 different T.V.s and comfy floor pillows. And the most interesting- a pain inducing video game that punishes you for preforming poorly!  The game is essentially Pong, but with the added bonus of pain. Players face-off across from each other, placing their left hand on a designated area and using their right hand to control the game knob.  If they miss balls they face heat, electric shock and worst-of-all hand whipping consequences.  I didn’t believe it when our guide first brought it up, but some of the people in my group played and I witnessed the abuse first hand!  If you don’t believe me check out this YouTube video I found of people playing: http://www.youtube.com/watch?v=3cH5dGyFxIs.  It was crazy, but lot of fun (to watch!).

All in all I’ve been having a great experience with classes and social activities these past few weeks and am looking forward to continuing with them.  I’ve signed up for German classes through March 2nd and am hoping for some vast improvment in that time…I’ll keep you updated on how it goes!