Week 3 of our Enrichment project was pretty basic- speak/listen to/practice German jeden Tag (every day). We were able to accomplish our goal relatively easily. First and foremost- I am in German class every morning for 3 hours.  Plus I always comes home with a few homework exercise to complete. My required daily use of the language  helped to foster conversation and discussion in and about German with Dave (who, to be honest, failed pretty miserably at this week’s goal).  To be fair he does have finals coming up in the next two weeks and has been studying his butt off!

In addition to the German classes we worked towards our challenge by supplementing flashcards, podcasts and German language television programs. We’ve been using a great flashcard program called Anki for awhile and simply amped up the number of new cards we covered each day. This is a great program for anyone looking to learn something new.  After downloading you can choose from hundreds of different topics.  The program allows you personalize your learning by dictating how many cards you cover a day and then keeps track of your successes and failures.  You can also chose to have words you are most confident with come up less often in review than words you need more work on.  I worked on more than 200 new words last week and am continuing to review them and add more this week.

In regards to the “listening” portion of our goal- I employed the use of our favorite device- the iPad.  I downloaded and listened to a couple different German language and culture podcasts over the course of the week. These included “Slow German”, “Die Deutsche Welle” and “Rick Steves’ Audio Europe”. I still have a hard time understanding German when spoken at a normal pace and with vocabulary words beyond my A1 level, but I figure my brain might absorb something…maybe I’ll try it while I sleep?

An easier way to put some context to the complex vocabulary was by watching German language television.  Interestingly enough the Germans watch a lot of American T.V.- only they dub EVERYTHING!  It’s a little weird to watch the Simpsons or South Park in German (the voices just aren’t the same!), but it’s interesting to watch a familiar plot line while trying to place the dialogue with what you think the character is saying. I also wonder how much of the story is lost in translation? What’s the general German opinion for example about the South Park episode that has Chancellor Angel Merkel brandishing a gun with her German posse?  My experience thus far with Germans is that they have a much better sense of humor than attributed by popular culture, but I wonder how much of our American humor really translates…I guess I’ll just have to work harder to increase my fluency so I can find out! 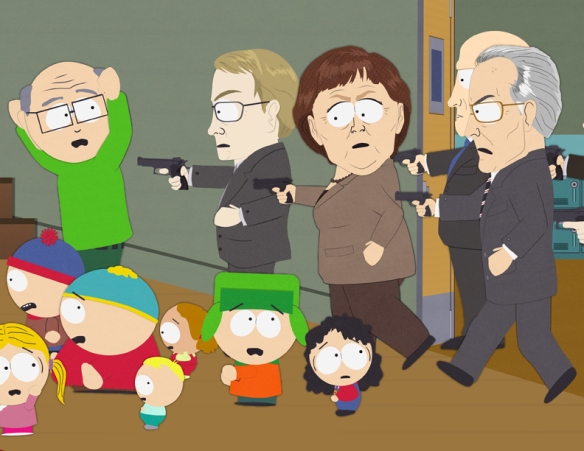 P.S. Dave also forced us to watch Steve Seagal’s Under Siege 2: Dark Territory auf Deutsch. In case your wondering it’s not any better in German.

COMING UP THIS WEEK….

Enrichment Project- Week 4:  Classic Movie Week (3 movies from this list that neither of us have seen)