We returned on Monday from a wonderful 4 day Easter weekend in Paris. We left for the city of lights on Thursday afternoon, landing at Paris Orly just before 6:00 pm. It was an easy ride into the city and we were easily able to find our flat- which we found through AirBnb and turned out to be a great deal in a GREAT location! If you’re headed to Paris in the future let us know and we can pass along the information. Our flat was located in Marais, in the 4th arr. of Paris- smack dab in the center of the city and just a 10 minute walk from Notre Dame. We spent Thursday evening exploring our neighborhood a bit and then dinning on some yummy sushi at one of the many Japanese establishments in the vicinity. We turned in early so we’d be bright eyed for a full day of touristing Friday.

We were up and out of the house before 9:00. Our first stop was the Louvre, but before heading into the museum we took a little walk and enjoyed the most expensive coffee of our lives in the Tuileries.  We saw a few flowers and buds on the trees- it made us hopeful for the end of Winter! It was still pretty cold, but at least it was sunny and we were willing to brave the weather for the prime outdoor seating. 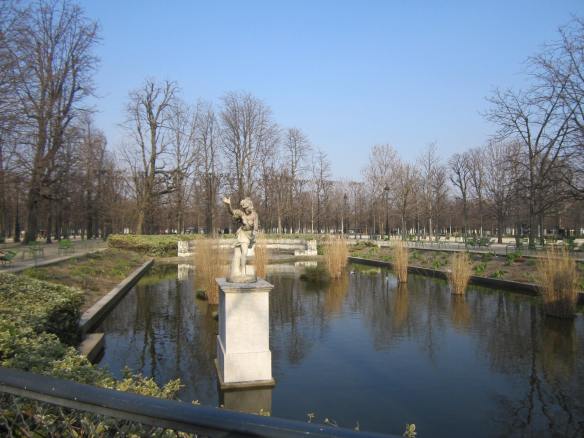 After coffee we headed into the Louvre and spent the next 3 hours perusing the immense collection. We’ve both been to the Louvre before, but decided we still needed to revisit her most famous works so we braved the crowds to glance at the Mona Lisa and the Venus de Milo. We also spent a good deal of time in the Egyptian art section- which was Dave’s favorite area. 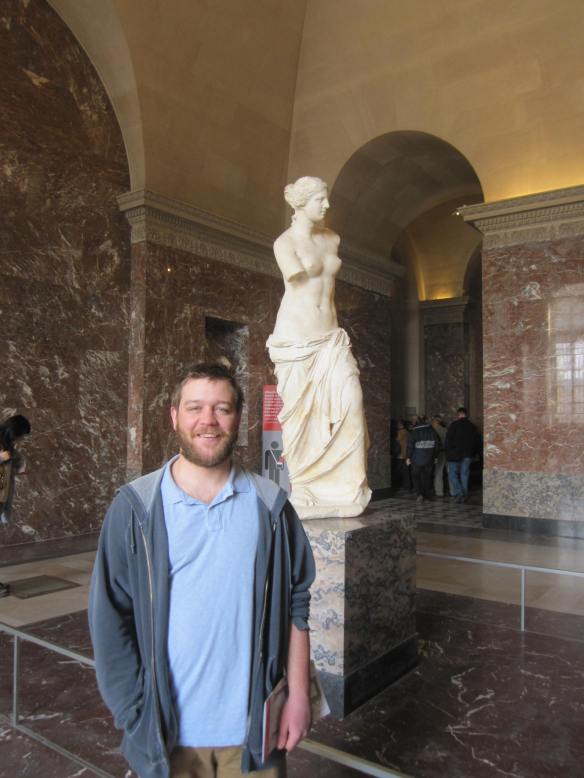 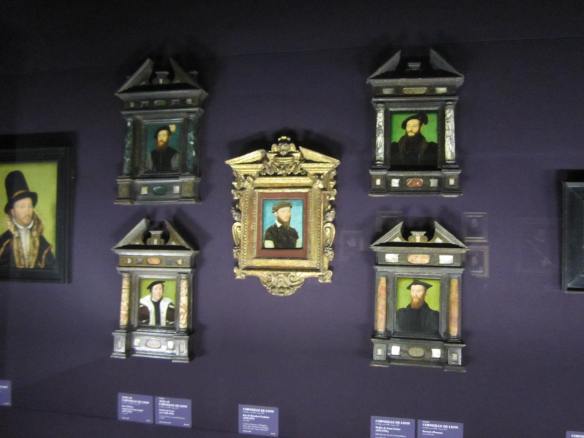 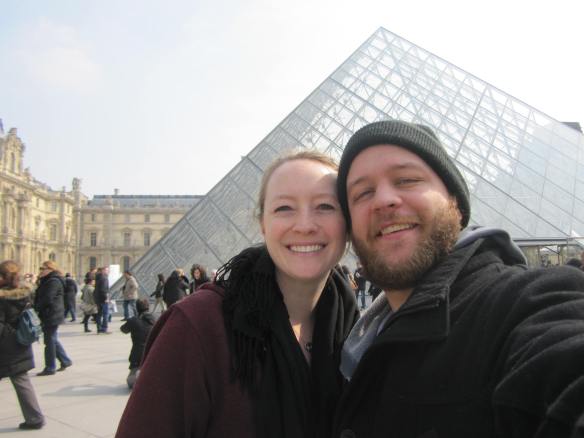 Post Louvre we headed over to the left bank (Paris that falls on the south side of the Seine) and wandered through the streets until we came across a grocery store where we picked up our favorite sterotypical French foods- a baguette, cheese and wine. We also popped into a bakery for a meringue and a chocolate tarte. After collecting all our provisions we found a spot in the little garden on the tip of the Île de la Cité. 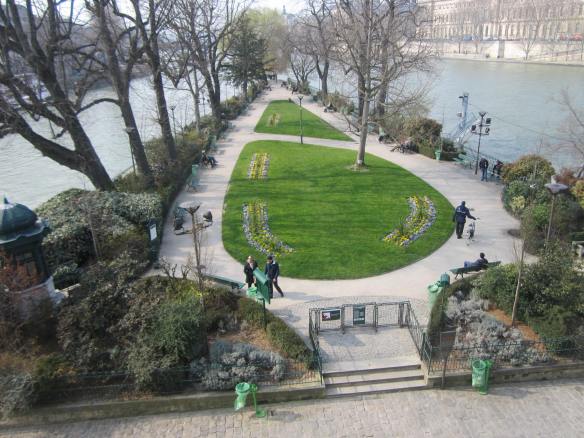 After lunch came the real walking. From Île de la Cité we walked along the Seine taking in the sites as we made our way to the Eiffel Tower. The Eiffel Tower was literally crawling in tourists, but we managed to find a nice quiet spot in the adjacent gardens were we rested up and took a bunch of photos. 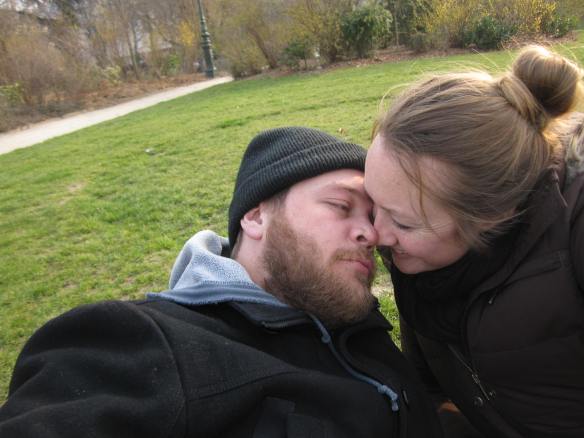 After our photo shoot we jumped on the metro up to the Arc de Triumph and then walked down the Champs-Élysées, window shopping as we went. The streets were absolutely packed the entire trip. I don’t know if it was just the fact that it was Easter weekend or that Paris is always just that crowded- but you really couldn’t escape the throngs of tourists. We finished our evening by walking back through the Tulieries and straight on to our flat- stopping for some groceries along the way. We figured we’d pop in for a breather, eat some dinner on the cheap and then head out again, but were so exhausted from the day we ended up dozing off in our pj’s as we finished up a bottle of wine. So really a pretty good way to end the day.

We woke up well rested on Saturday and headed right up to Montmartre for a tour of the district. We met up with our wonderful tour guide, Thomas from Discovery Walks, in front of the Moulin Rouge. The next two hours were spent exploring the renowned, artistic 18th arr. The district was originally located just outside the walls of Paris- literally the street the Moulin Rouge is on was the barrier. It allowed citizens to escape some of Paris’s laws, restrictions and taxes- hence a great place to set up the types of establishments that rose up in the area. Basically the area developed into a haven for artists, revolutionaries and people seeking an open, progressive, ever-changing location. People like Picasso, Renoir, Langston Hughes and many more called Montmartre home and drew inspiration from its citizens and streets. The most conspicuous building in the district is the Sacré-Coeur- which is where our tour concluded.

Following our great tour we wandered around Montmartre a little longer before jumping on the metro and heading out to the famous Parisian flea market- Les Puces. We were a little taken aback when we first got off the metro as the first big sites were a KFC, a Subway and a whole mess of people trying to hawk knock-off Louis Vuitton and Rolex. We walked through hordes of stands selling the same cheap stuff, a little worried that we’d read the online reviews wrong or had gotten off at the wrong stop, but after about 10 minutes of shuffling along we finally found an opening that lead to the most romantic little alleyways filled with little shops selling everything from antique furniture and jewelry to old fashioned keys and silverware. It was a complete 180 from the booths set up outside. We spent awhile perusing the goods (buying just a few little trinkets:))before we decided we’d had enough and were going to pass out if we didn’t find some lunch soon.

We headed home for some lunch and a nap. After resting up we trekked back out to Montmartre for dinner at a great little spot recommended by our friend Max. It was called Au Pied du Sacré Coeur. The food was delicious, the servers friendly and everything came in a great price (for Paris!). We were adventurous and started with the escargot in garlic sauce. I had a steak with bleu cheese sauce for my main and Dave went with the Duck confit- which was the highlight of the meal for sure. We ended with a traditional brulee. Of course a bottle plus of wine was also consumed.  We were stuffed, but we managed to head out to the Grands Boulevards and consume a few more beers at a popular Irish Bar- key word here is a couple. At 7 Euros a beer we were not thrilled to be spending more than double the amount on booze we do here in Berlin. Just to provide some quick perspective- we went out with friends a week or so back to a bar here called Badfish. Beer on tap is 3 Euros for a .5 liter- already less than half the price of Paris. Oh but wait- not only is beer only 3 Euros, on Wednesday night they have a deal that when you buy a beer you get a free shot of Jameson. Needless to say Berlin is definitely a better (or worse depending on how you look at it) place for these beer-loving Americans. Even with the priciness of Paris we still love it and had a great night out! 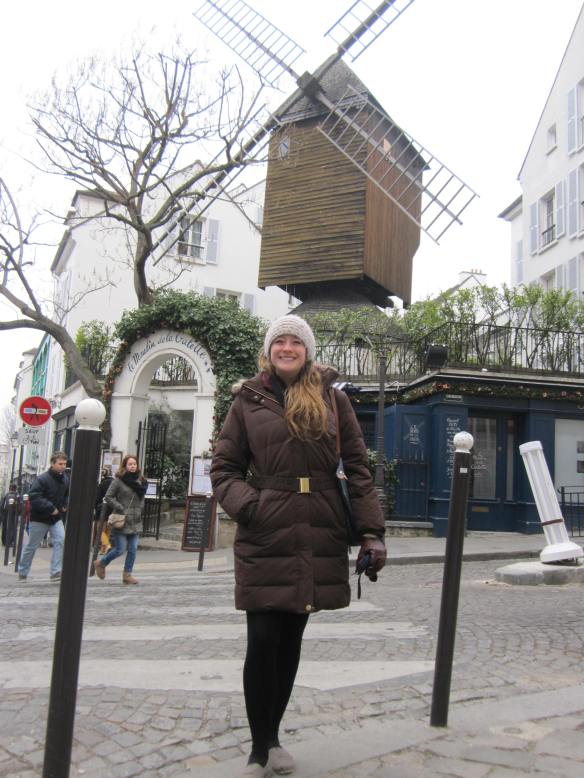 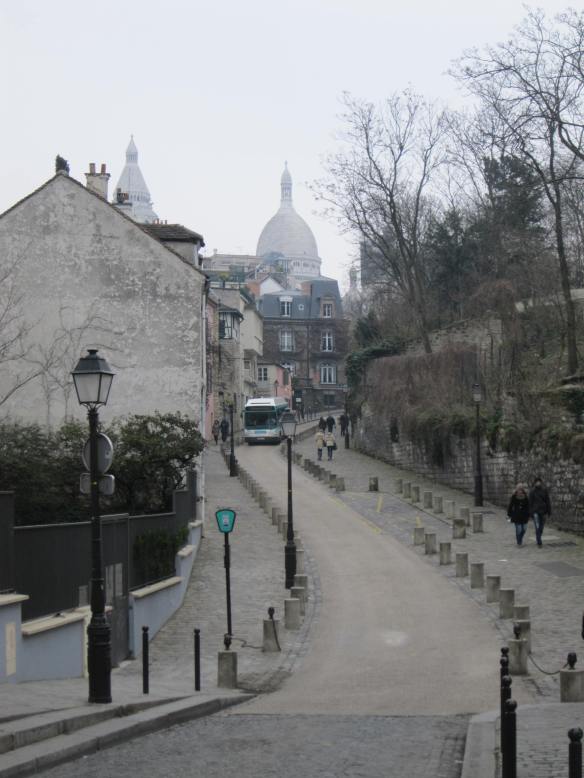 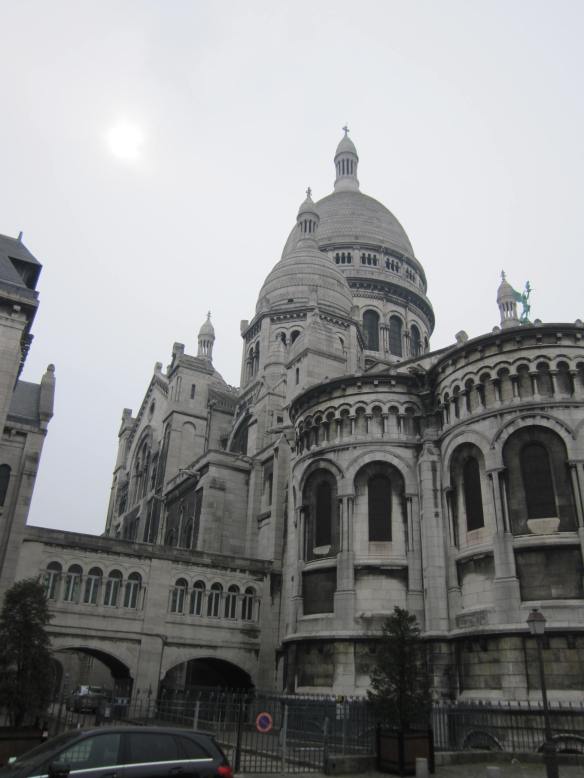 He is Risen! We lost an hour for day light savings Saturday night so we ended up sleeping in a little on Easter morning, which was a nice way to start the day.  After waking up and showering we grabbed some breakfast (croissants- regular and chocolate) from the corner bakery and then some coffee from Starbucks (unbelievable, but seriously cheaper than the local shops). We took our b-fast and walked over to Notre Dame to hear the bells chime (Quasi?!?).

We initially planned on trying to attend a service at Notre Dame on Easter morning, but decided the multi-hour wait, the prospect of standing the entire service and the fact that it was delivered in Latin was a little overwhelming. Instead we enjoyed a beautiful view of the cathedral from the bleachers set up outside, while catching part of the service on the big screen and munching on our delicious breakfast. Though it was sunny it was still freezing and before long we had to get moving again. 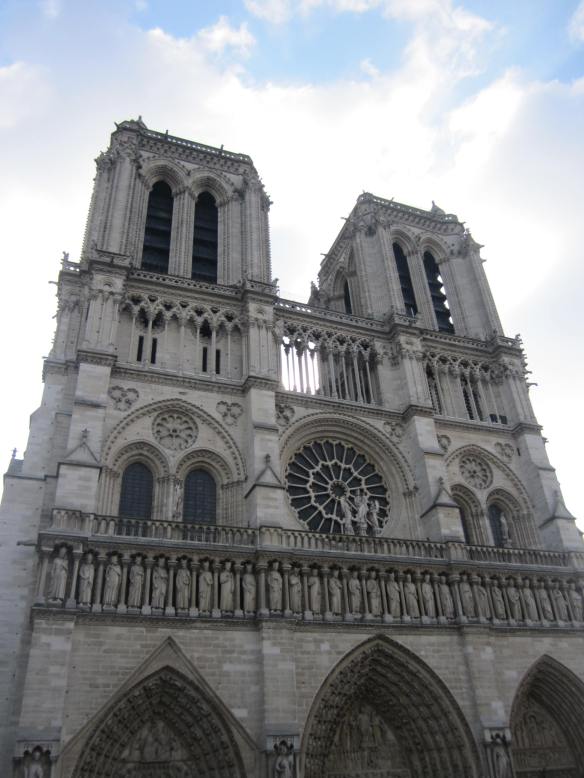 Right behind Notre Dame rests Paris’s deportation memorial- their version of a holocaust memorial. After spending a little time contemplating the horrors many Parisians were subjected to we crossed over the Seine and headed up to the Musee L’Orangerie. The museum houses one of Monet’s greatest masterpieces- his Waterlilies. The first floor has two large oval rooms, each covered by the painting. Natural light streams in from the ceiling. The paintings are absolutely gorgeous and mesmerizing  Unfortunately no photography is allowed of the paintings, but no photo could do it justice anyhow. Downstairs contains an additional collection of paintings by artists such as Renoir, Modigliani and Picasso. We loved the museum because of how manageable it was. We were able to see everything and didn’t feel rushed or overwhelmed. Definitely would recommend for future Paris visitors. 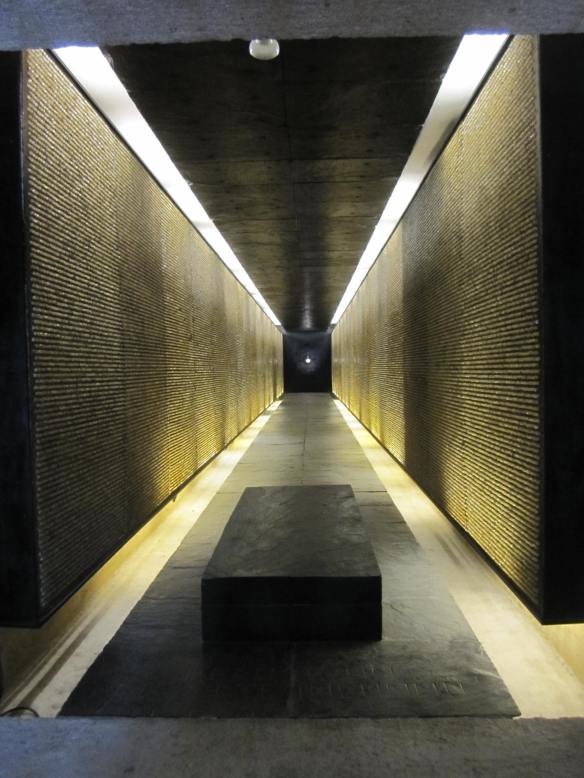 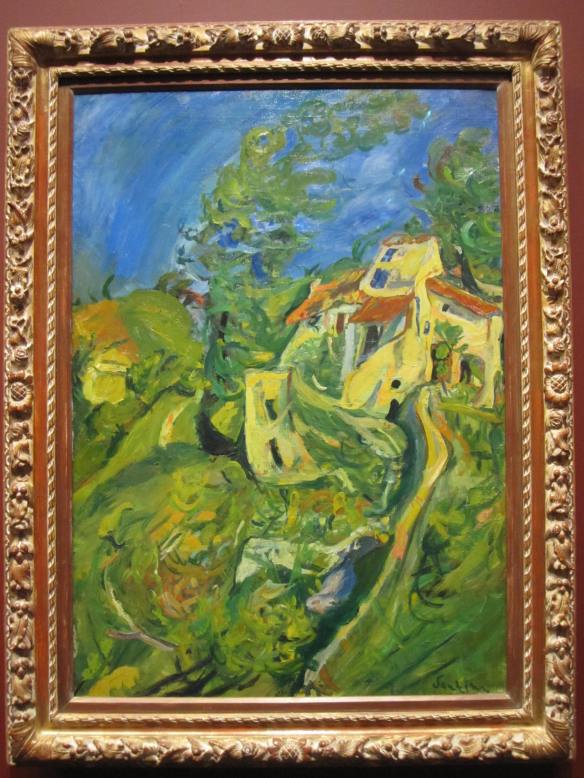 We spent the next few hours walking the streets of Paris, enjoying the sunny Easter day and munching on some mussels, beef bourguignon and of course wine, cheese and baguettes. We walked along the Seine, explored more of the left bank, sat for awhile in Luxembourg gardens and then headed back to the Seine for an evening boat cruise. As the trip to Paris was planned as a gift for Dave’s birthday my parents added to our fun by gifting him a $100 to do something fun with. Dave decided it would be fun to put the money towards a nice dinner (the night before) and spend the rest on the water. We braved the cold with outdoor seats and had a great time cruising up and down the Seine, getting to see Paris from a different vantage point.

We started to walk home so we could grab some dinner and warm up after our boat cruise, but as we were walking past Notre Dame we noticed that the line had all but disappeared so we decided to pop in and we caught part of what must have been the 6th or 7th Easter service of the day. Even with the service being conducted in Latin it was a powerful experience to be in the cathedral during a worship service and we were lucky to witness some of the amazing choral works. 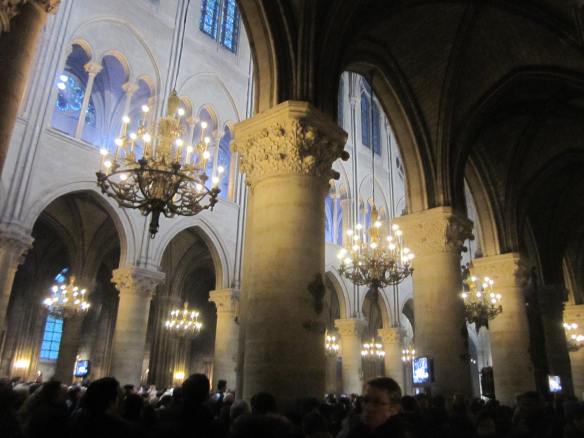 Our last evening in Paris was relaxed and low key. We by a happy hour on the way home for a drink and then ate the last of our cheese, baguettes and other goodies at home before grabbing one last bottle of wine and finally taking the time to explore more of Marais. We walked along the streets stopping at the Bastille, admiring Place des Vosges and wishing we had time to visit every cute cafe, shop and restaurant along the way. We saw and did a lot in during our time in Paris, but definitely agree that there’s much more to be seen and we can’t wait to visit again in the future!

We had time for one last walk and stop at the corner bakery in the morning before we had to make our way to the airport. We’re back in Berlin and really, REALLY ready for spring to get here already. Luckily we have our big vacation to Greece coming up the first two weeks in May so we have beaches and islands on the brain…helps you pretend it’s balmy outside:) Hope everyone had as wonderful an Easter weekend as we did and that all is well state-side and with our friends around the world. 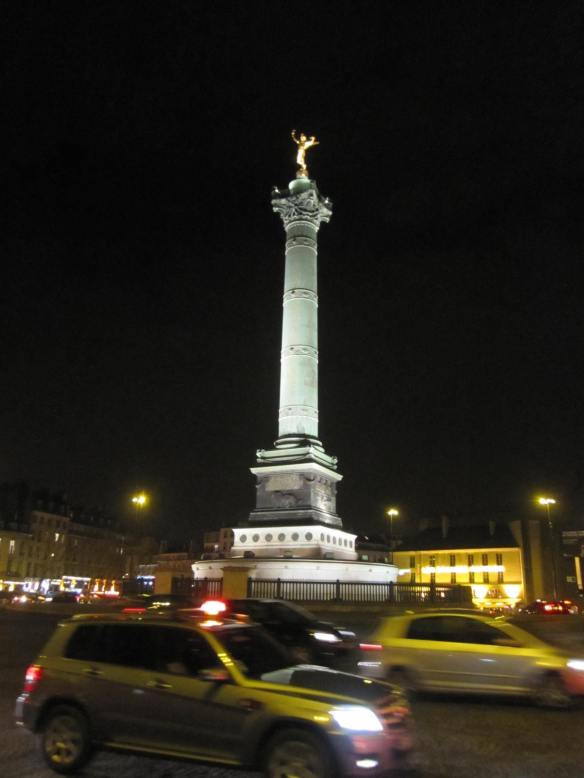