This past weekend we took a quick trip east to visit the city of Dresden and Sächsische Schweiz. We were only gone for one night, but we saw and did a lot and had a great time!

Friday night we celebrated our -1 year anniversary (we’re getting married on October 12th next year) with a very American night- cheeseburgers, buffalo wings and cake! The next morning we got up bright and early to catch a bus to Dresden. We hit some unexpected traffic and ended up detouring through the suburbs of Berlin for awhile, but the trip is only two hours, so the extra time didn’t put too much of a dent in our plans.

Once we arrived we headed directly to the Frauenkirche. The beautiful church was completely destroyed, along with most of Dresden, during Allied bombing raids in the Second World War. It was originally built in the 18th century and when it was reconstructed in the 1990s and early 2000s the original plans first created in the 1720’s were once again used. The church is suppose to be an exact replica of it’s former glory. It’s gorgeous outside and even more beautiful inside. The colors inside are unique pastel hues and the balconies are beautifully curved. The reconstruction work is pretty amazing and it was especially cool to see the old stones salved from the ruins- in the picture below you’ll see that it’s pretty obvious to identify the stones.

Frauenkirche in the year 1880

Frauenkirche in the year 1945

After visiting the Frauenkirche we grabbed some lunch and then spent the rest of the afternoon and evening just walking around Dresden and visiting the different districts. Though we didn’t venture into the Green Vault (home to the largest collection of “treasures” in Europe) we did walk around the grounds and both agreed it was the prettiest spot in the city. 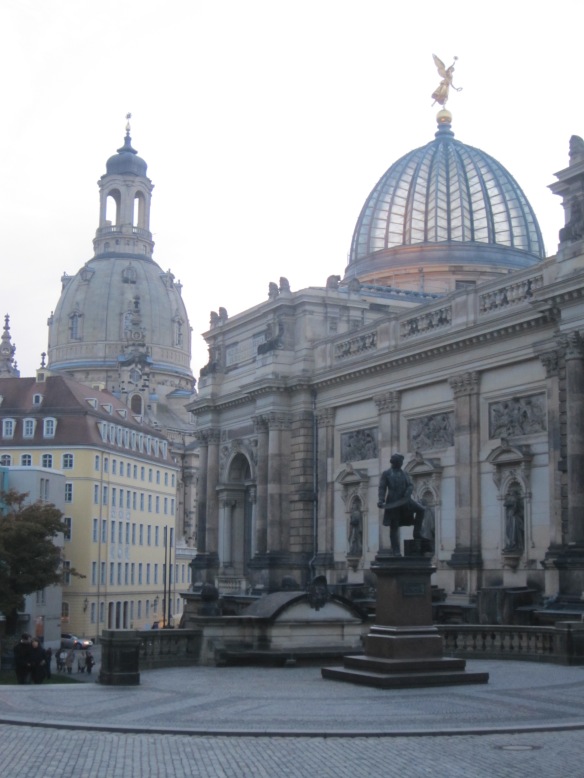 Following hours of walking and taking in the sites we decided to head up to the Gothic Quarter for dinner. As usual we walked around looking at thousands of places before actually making a decision. Unfortunately the place we chose (Wenzel Prager- a Bohemian style beer hall) was packed with no tables available. We opted for our second choice- a yummy Thai/Vietnamese restaurant.  And luckily as we passed Wenzel Prager on our way back to the hotel we saw that it had cleared out a bit and were able to pop in to taste the beer sampler. So basically everything worked out great:)

The next morning we woke up early, ate a delicious European style breakfast at the hotel and headed down to the train station to hop a train to Sächsische Schweiz (the Switzerland of Saxony), one of Germany’s beautiful National Parks, for a day of hiking and outdoor fun. Our first stop was the town of Rathen and our hike up to the Bastei Bridge. To reach the bridge you hike along the famous “Malerweg”, German for painter’s way. The area and the bridge are known for being the subject of many paintings over the years, most notably by German artist, Caspar David Friedrich. The trail was pretty chock full of people, but the weather was perfect and as we reached the top the sun finally broke through the morning clouds. Along the hike we were provided with various scenic viewpoints of the Elbe River, the valley and Sächsische Schweiz. 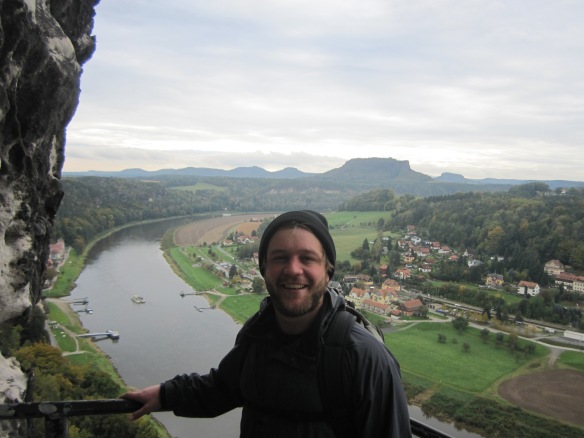 We took a different trail back down the mountain stopping to have a small snack and enjoy a bit of the gorgeous fall foliage.

After our hike up to Bastei we hopped back on the train and headed a little further east to Bad Schandau. Another ferry ride down the river and we were in the heart of the gorgeous resort town. We walked through the town up to the Kirnitzschtalbahn- a tram established in 1898 to ease the travel for visitors to the national park. The tram was old and loud, but enabled us to see more of the park and make it up to the Lichtenhain Waterfall. We were warned from the outset that the waterfall was less than impressive, but were surprised by the effort the park had taken to spruce it up. Next to the waterfall is a restaurant/mini-biergarten and as we were enjoying a couple Weißbiers dramatic music began to play and a hoard of tourists rushed to the base of the viewing area. A few seconds later massive amounts of water came down from the falls creating quite a production. We were pretty much cracking up at the corniness of the exhibit, but that could also have had to do with the 1/2 liter beers on pretty much empty stomachs. Even though it was corny it was still a lot of fun. After our beers and a slice of Apfel Kuchen we headed back to the tram to the ferry and started our trek home. 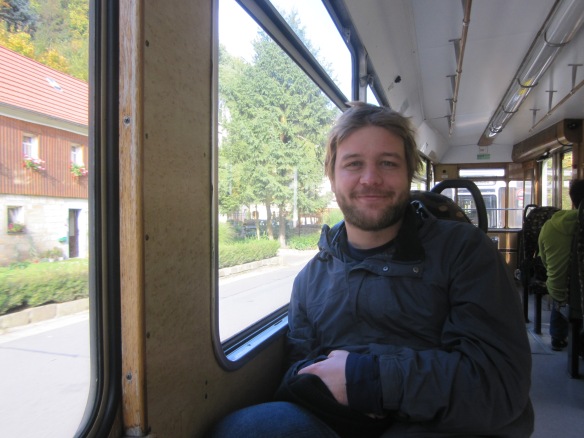 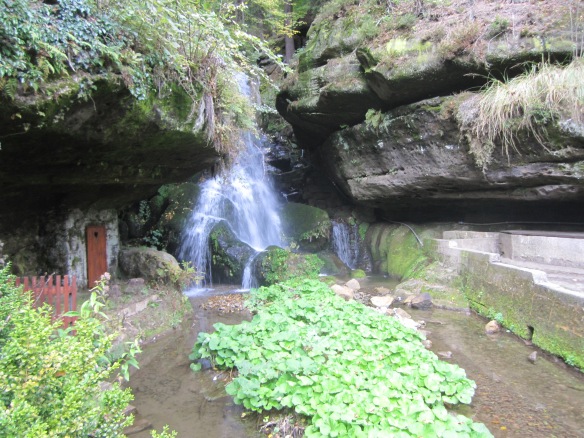 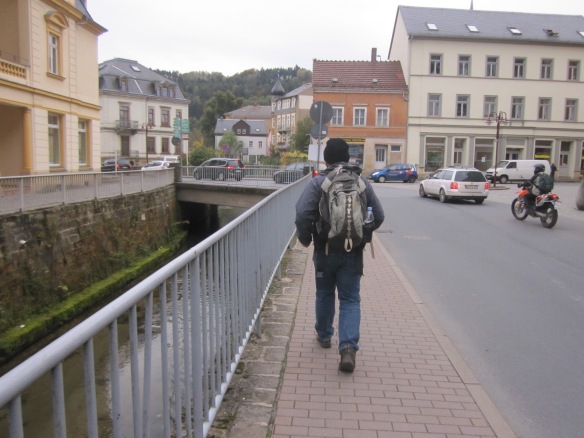 We had a great trip out east and we’re happy to get out into nature for a short time. Can’t wait to visit more cities in this beautiful country!

2 thoughts on “Dresden and Sächsische Schweiz”