Last night the international office at HWR (Dave’s school) had an outing to the Berliner-Schultheiss Brewery.  Tickets were a bit steep at 10€ a piece, but it ended up being completely worth it!  The night started a little precariously- it took close to an hour and a half to reach the Brewery via public transit and everyone was ready to get started when we arrived.  They began the tour with a short film about the history of the Brewery and then we walked throughout the plant looking at the brewing tanks, storage systems and finally bottling plant.  Our guide was a master brewer himself and knew his stuff!  I asked him what his favorite beer was and he said there was no way he could ever choose, but he knew that German beer is far superior to other beer.  He asked where Dave and I were from and when we said we’d been living in Boston he made mention of Harpoon and their famous IPA.  We were surprised and excited that he knew about Harpoon, he probably thought it a little ridiculous how excited we were, but oh well.

Tasting followed the tour portion of the outing.  I’ve been to my fare share of brewery tours and typically tastings get you just a couple beers or maybe a pitcher or so to share- not in Berlin.  We were led to a warm, beautifully lit room in a historically preserved buildling (basically it was one of the only things left standing in Berlin post WWII) with 6 delicious beers on tap and another array in bottles.  We were told we had an hour and a half to drink as we pleased- UNLIMITED BEER for 1.5 hours! Of the 25 or so of us in the group probably 20 of the students were undergraduates studying abroad- needless to say people got pretty drunk.  I tried to contain myself, but did end up having 6. I think Dave beat me by 1 with 7. The Bock and the Markischer Landmann were my favorites and Dave liked the Schultheiss best, but all were delicious! 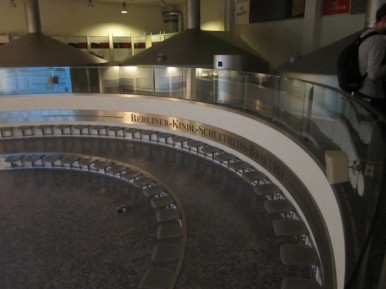 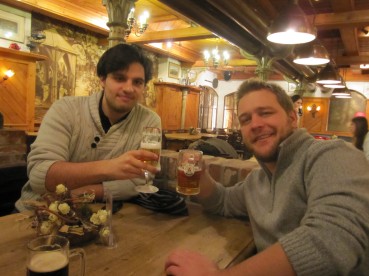 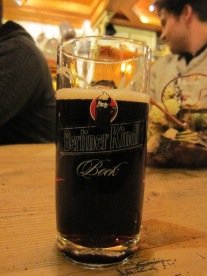 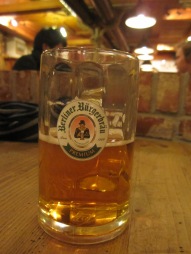 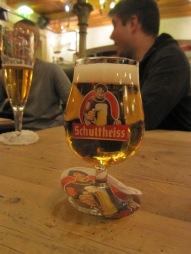 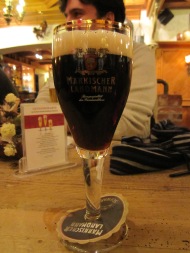